The South Bank of Singapore River


A Brief History of Boat Quay

Boat Quay used to be the hub of commerce and trade in the 1860s that stretches from Elgin Bridge to Cavenagh Bridge. Though it occupies only a small section on the south bank of Singapore River, it was the centre of trade along the river.


The row of shophouses here were once occupied by wholesalers as offices and godowns. Bumboats or lighters were used to transport cargo between the ship in the harbour and the quay. The cargo were then carried by the coolies from the bumboat, which moored along the river, to the shophouses.

Today bumboat plying along the river carrying tourists instead of cargo on sightseeing trip. The shophouses were also being converted into pubs and restaurants. The area comes alive at night when the lights come on and people gather at the pubs and restaurants to chill out. 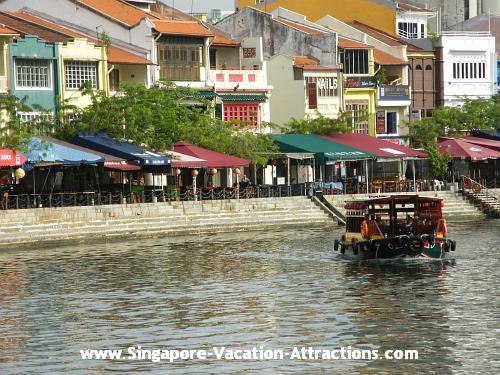 A Tour along the South Bank of Singapore River

This tour starts from Coleman Bridge and ends at Cavenagh Bridge. It will take roughly an hour to complete. It is fun to tour along the bank of the river as you will soon discover a handful of sculptures that were being placed by the riverside.

It's also a historic tour as you will learn along the way the history of the Singapore River from a number of information boards that were being erected by the riverside.

I will also highlight to you where are the ideal spots to pose for a photo so that you can bring back home nice pictures to show off to your friends.

Getting There: From Clarke Quay to Boat Quay

Click on the Singapore Street Map which will show you a map of Singapore River and how to get to Clarke Quay MRT station from any part of Singapore by public buses and MRT(subway).

At Clarke Quay MRT station, look out for signage for Exit E. Once you come out of the second escalator, turn left and go ahead till you come to the following sculptures.

The Merchants of Singapore

A cluster of nine human figures representing a family of merchants at Clarke Quay. It was created by Italy sculptor Michele Righetti. Only five of the merchants were shown here, you have to be there to look for the other four. It's common to have nine or more than a dozen of family members in the old days. The new generation, however, choose to have one or two.

After passing an underground, you will see this bridge when you look back. It was designed by an Irish architect George Drumgold Coleman (1795-1844) and completed in 1840. Being replaced several times, the present one was built in 1986.

Go further ahead, you will come to another bridge. This bridge was named after Lord Elgin, the Governor-General of India. It's an ideal spot where you can take few photos of the Singapore skyline.

Cross the bridge, you will see a row of shophouses along the river bank. This mark the starting point of Boat Quay, where a number of good restaurants, bars and pubs were located. Read Boat Quay Restaurants and Bars Reviews to choose a restaurant that suit you best before making a reservation.

You will see a ticketing kiosk when you reach shop No. 60 Boat Quay. This is where you can buy a ticket and embark on a Singapore River Cruise.

There are two spots which are very ideal to take a complete view of the Singapore River, one is in front of the UOB Plaza and the other near the Cavenagh bridge.


Art by the River

You will see the bird sculpture when you are approaching the UOB Plaza. The bird, symbolishing the joy of living, was created by South American sculptor, Fernando Botero.

Another sculpture The River Merchants was located near the Cavenagh Bridge. It looks like merchants were negotiating a deal where the coolies were busy loading goods onto a bullock cart.

The following information board was one of the few that were erected by the riverside. It provided you with a quick overview of a particular event. The last sculpture First Generation showing five boys jumping happily into the river, a common scene in the old days.

It was named after the last appointed Governor-General of Singapore, Major-General William Orfeur Cavenagh. Built in 1869, it was considered as the oldest bridge on the Singapore River.

The police notice erected at the entrance of the bridge indicated that it was not meant for heavy vehicle. That's the reason why it was served as a pedestrain bridge once the nearby Anderson bridge was completed in 1910.

When completed in 1928, the Fullerton Building was considered as the largest building in Singapore. Before being converted into a luxury hotel, it was formerly a General Post Office.